Concern for Children and Environment – Nepal, a nonprofit NGO, was established in March 1993 with the objective of advocating children’s rights and improving the social and natural environment for children in Nepal. In order to be a true advocate for children CONCERN, from its inception, has been conducting research to ascertain the reality of this situation and present facts and figures to the peacemakers, implementers and duty-bearers at all levels. In this process CONCERN conducted its first research on the situation of Child Porters in 1994. As per further CONCERN studies in 1997, there are more than 70 sectors where children have been regularly employed as child labourers. CONCERN completed specific research on the plight of child labourers in stone quarries during 2000. This report is the culmination of national level research on Child Labour in Stone Quarries. 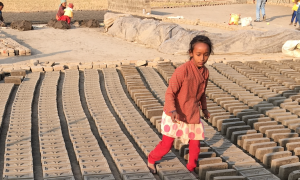 Among a population of 23.4 million in Nepal, 10.7 million are children under 16 years of age – almost 44% of the total population. According to a nationwide study by Tribhuvan University in 1999, 2.6 million children – more than 27% – are at work as child labourers today. 60% of those children are between the ages of 6 and 14 years. However, 1.7 million are economically active and 0.9 million are working without pay. Although the country has ratified several international and regional conventions concerning protection of the rights of the child, including the UN Convention on the Rights of the Child (UNCRC), children’s rights continue to be violated in practice. The UNCRC has yet to be translated into reality: best interests of the child, rights to education, leisure, recreation and cultural activities, and the right to be protected from all types of exploitation and abuse are not seriously considered to date.

The stone quarry is an area in which child labour is used and often exploited by owners, employers, middlemen, adult workers, local children and at times even parents. Since this is the first study of its kind, accurate statistics at the national level are not available on the number of stone quarries and workers employed. Study teams estimate that thousands of stone quarries exist in different parts of the country with tens of thousands of children working in them. This is certainly one of the most hazardous and worst forms of child labour and exploitation. Just to mention a few of the jobs that children perform in stone quarries includes activities such as excavating and extracting stones and boulders, loading trucks for transport and crushing the boulders into gravel. In terms of health and hygiene, it is extremely dangerous as dust particles cause respiratory illnesses in addition to many other work-related diseases and injuries, largely due to lack of even minimal protective gear. Stone quarries are considered a threat to children’s health, education and development. Despite the legal provisions of Labour Act 1991, Children’s Act 1992, Children’s Regulation 1994, and the recent Child Labour Prohibition and Regulation Act 2000, the majority of children continue to be exploited and abused in this field as in others.

CONCERN-Nepal has carried out various programmes for destitute children within and outside of the Kathmandu Valley and has long felt the need for working among child labourers in stone quarries. In attempting to initiate specific programmes to address the needs of child workers in stone quarries, it was necessary to become familiar with their situation, determine their number and their distinctive problems prior to assisting them with viable solutions. Consequently, CONCERN-Nepal became involved in this research and the results cover different aspects such as socioeconomic background, health status, employment and living conditions, family income, education, ethnicity, working hours, wages, age, gender issues and more. The most powerful indicators stressing an immediate need for relief and support in this field come from the voices of the oppressed children themselves.

adopted during the course of the study concentrated on Child-Centered Participatory Research (CCPR) techniques used to listen directly to the voices of the children, structured questionnaires, interviews, focus group discussions and field observation.

Altogether 208 children working in stone quarries from different parts of the nation were selected for individual interview and about 400 children were observed in total. The results are firsthand information gleaned from them, 74 parents and 22 owners of stone quarries who were also interviewed.

Stone quarries exist in almost all areas of the country. Given limited resources and time constraints, the research team conducted sample surveys in 14 out of 75 districts, representing all geographical and climatic regions, in order to determine the overall trend of child labour.

Results based on interaction with children, parents and through direct observation found children between 5 and 16 years of age toiling in stone quarries around the country rather than enjoying

The Rights of Children” was previously an unknown subject to all concerned in stone quarries.

Despite the large number of stone quarry children in peril, this field has hardly been recognized and has yet to draw the attention of policymakers and duty-bearers. Government at all levels, the UN, INGOs, local NGOs, and CBOs will have to work in conjunction on this issue to eradicate/minimize worst forms of child labour specifically in stone quarries.

Children as young as 5 years old are working in stone quarries and most of the older children are illiterate. They are exploited, harassed and abused in their working places physically, economically, mentally, sexually and psychologically by employers, owners, adult workers and parents.

They are overworked and underpaid. Due to unhygienic and dangerous conditions, children suffer from various kinds of disease and respiratory illness, skin infections, visual disorders, back and muscle aches, sprains and fractures, and many children sustain work-related physical injuries on a regular basis.

Poverty appears to be the principal justification parents or guardians offer for pushing children into this field of labour. Parental ignorance about the importance of education, lack of alternative income sources, discrimination in schools and in the society, and lack of access to school are some of the other reasons that innocent children have been suffering in stone quarries. Some children are still found working as bonded labourers even though the Constitution was amended in July 2000 abolishing this form of slave labour and all outstanding debts effective simultaneously with the provisions of the new law. Tragically child rights remain ideas on paper and never reach these children, their parents and employers. Children were found working even during odd hours, in direct opposition to the general standard and rules set by the International Labour Organization and National Labour Act. Children are made responsible for assuming the burden of taking care of their families with their rights to education, rights to enjoy their childhood, and rights to participate in decision-making for that directly affecting their lives completely violated by all concerned duty-bearers. No one, at the time research was conducted, had developed any kind of mechanism to monitor child labour in stone quarries and their conditions were utterly disregarded. However, Child Development Society (CDS) has since been working in Mahadev Besi, Dhading District to uplift the situation of stone quarry children through provision of direct support and education. 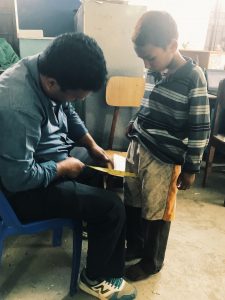 With consideration to the overall scenario of stone quarry children, the following actions need to be taken immediately, particularly with a view of the situation towards improvement and abolishment of this crime against children.

Development and enforcement of laws – Government must act immediately by enforcing laws to protect children from all kinds of exploitation and abuse in stone quarries. Necessary policies should be developed and those presently existing improved. In line with the laws, a national level strategy for working children must be developed with special efforts made to provide positive discrimination on behalf of working girls. A national level campaign is needed to officially register all stone quarries, employees and working conditions to ensure proper monitoring.

Private sector – All NGOs, CBOs, and the UN should be working together on this issue in a coordinated effort to make an impact on children who most need support. They should act as true advocates to implement children’s rights all over the country and should work from the family level, as that would add considerably to the success in directly benefiting children.

(The executive Summary is extracted from the newly released research report on “Child Labour in Stone Quarries” A National Survey Conducted by CONCERN-Nepal on July 5th, 2002 Kathmandu)